Need a babysitter? Scottsdale startup has an app for that 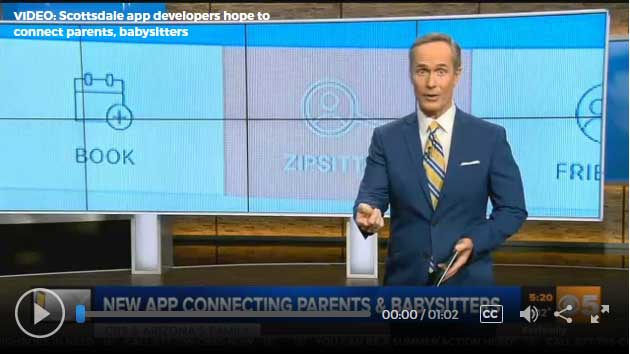 SCOTTSDALE, AZ (3TV/CBS 5) – A Scottsdale startup is offering babysitting services at the tap of a finger.ZipSit is a free smartphone app developed by two fathers who wanted to make finding a sitter easier.

Peter Helms, one of ZipSit’s co-founders, says the app takes care of the entire babysitter-booking process.

Launched in February, ZipSit, which available in the App Store, still only has about 1,300 users, mainly in the Phoenix area.

“Once we have the blueprint for success, then we’ll start taking it to other metropolitan areas,” said Josh Benveniste, Helms’ co-founding partner.

Mari Bice, a mother who has used the app, says it’s been easy to use and she’s been impressed by the sitters she’s booked.

“Everyone that we’ve had come has been amazing,” she said.

But some still remain skeptical, wondering if an app is a good fit for the child care industry.

“How do parents trust the babysitters through an online app?” Ni Huang, an assistant professor at Arizona State University’s W.P. Carey School of Business, asked.

The app does have a referral function for parents seeking a familiar face.

It also features “multiple layers of identity verification” and scores sitters on a variety of variables.

“SitScore improves on the star system, giving parents a better insight into a sitter’s past and potential future performance,” explains ZipSit.com. “[SitScore] gives parents a fresh, unbiased assessment of a sitter’s performance, experience, activity, and success, through ZipSit’s proprietary algorithm.”